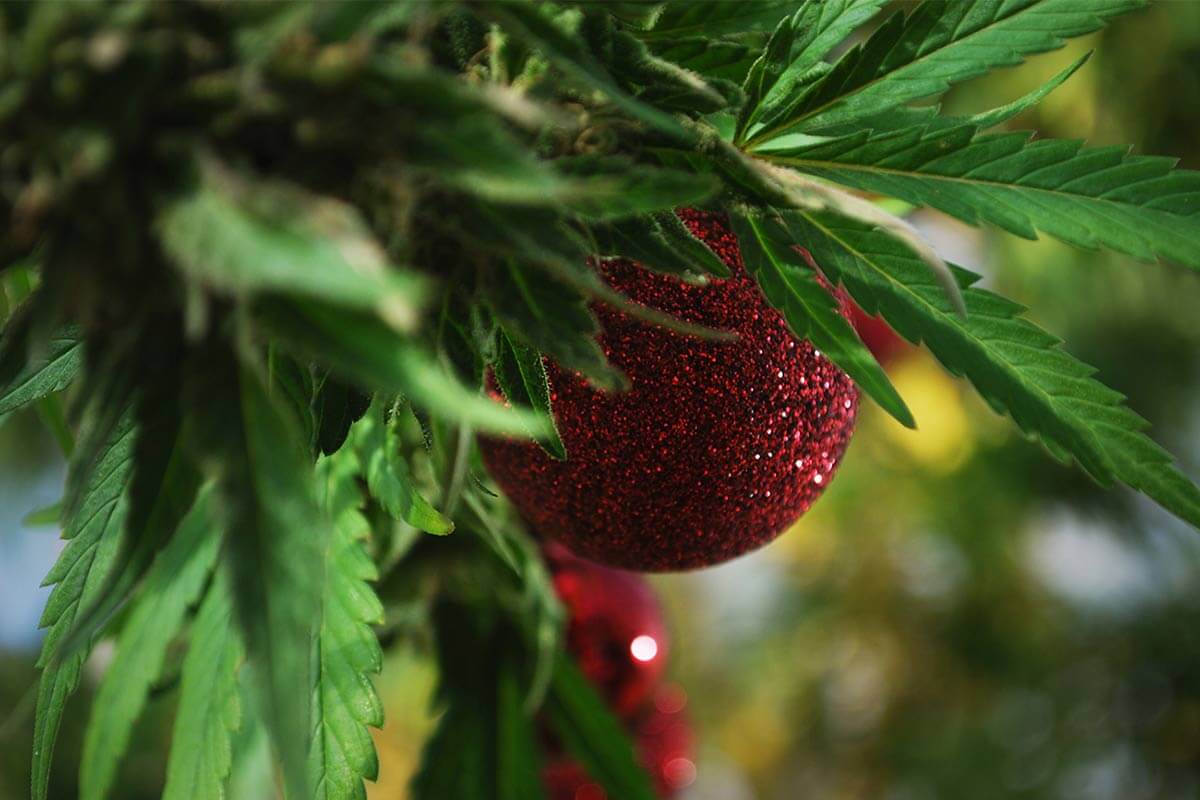 The Holiday High: A Look at Seasonal Trends in Cannabis 2018

The Holiday High: A Look at Seasonal Trends in Cannabis 2018

This report examines Headset data for holiday sales going back to 2016, in order to elucidate what kind of sales bump the end-of-year holidays provide, when they provide it, and which products benefit from it. Retailers should use it to plan seasonal specials and stock up on important holiday items, and it should be of interest to anyone who wants to know what consumers buy for the holidays.

Cannabis, like any other retail good, sees a significant sales bump around the holidays. What better gift than an Advent calendar with 24 different strains in it, right? Or, say, CBD dog treats for the poor pup who’s forced to suffer through New Year’s Eve fireworks every year? For this report, we’ve taken a look at our data on holiday trends, with the aim of determining just how big of a deal Thanksgiving and Christmas are for the cannabis industry.

We know these end-of-year holidays drive sales, but at Headset we’re always curious to know a bit more. We’ve looked at what’s selling from each category, when it’s selling, and how much it’s selling for, in order to provide a more complete picture of this seasonal sales trend.

Christmas is, unsurprisingly, more of a sales driver than Thanksgiving, but both cause a statistically significant bump in sales. And there’s even a bit of a honeymoon in the new year, before the doldrums of January and February set in. Black Friday is obviously big, but this is cannabis so there is naturally a special cannabis themed day to accompany it, and we’ve got “Green Wednesday” sales trends in here too.

Overall, we see that the cannabis industry is settling into patterns similar to many other retail industries, with the holiday season being one of the busiest and best of the year. But in cannabis, unlike, say, menswear, there’s still a significant celebration factor. A tie is a tie is a tie, whether you buy it for your big job interview one the summer or give it to your office Secret Santa in early December. But in the case of weed-infused beverages, the bump they see before the holidays is obviously motivated by a desire to consume them over the holidays. See also: cannabis-infused personal lubricant sales the week before Valentine’s Day. And Christmas, actually…

But the point is, weed presents some unique holiday trends, and showing those trends in the form of data is something we’re super excited about at Headset. Whether you run a retail store or are just wondering what cannabis lovers want for Christmas, you’ll find something interesting in this report.

Data for this report comes from real-time sales reporting by participating cannabis retailers via their point-of-sale systems, which are linked up with Headset’s business analytics software. This report is based on data collected from retailers in several U.S. states during the end-of-year holiday season in 2016, 2017, and 2018. That data is cross-referenced with our catalog of over 356,000 products to provide detailed information on market trends.

The end-of-year holiday season sees two major sales spikes. One is the days leading up to and following Thanksgiving, and the other is centered around Christmas. New Year’s Eve is also a noteworthy bump, but the holiday season’s highest sales peaks are around those two major holidays. Thanksgiving sees a twofold bump, once on the brand new “Green Wednesday,” a surprisingly successful marketing ploy cooked up by the cannabis industry to encourage pre-Thanksgiving purchases. There is also a bump on Black Friday, the nation’s traditional day of deep discounts and frenzied shopping, but it’s interesting to note that Green Wednesday results in a significantly larger sales bump.

Perhaps this is due to it being a more cannabis-themed day, or perhaps it’s just that people are already stocking up before Thanksgiving, but it’s definitely working. Sales increases for the past three years were all above 50%, while Black Friday bumps were 17%, 37%, and 21%for 2015, 2016, and 2017, respectively. Cannabis buyers probably aren’t flocking to stores the day after Thanksgiving for Christmas gifts, because people generally prefer to buy cannabis products closer to the time they’ll be consumed. It’s probably safe to assume there’s a Fair amount of cannabis consumed on Thanksgiving Day, however, which could explain the difference.

Speaking of Christmas, it’s an even more popular holiday for pot than Thanksgiving. Sales are 10% higher than Thanksgiving, and 22% higher than a normal week. However while purchasing the week before Christmas is increased, people actually buy the most expensive production the days between Christmas and New Year’s Eve. And on New Year’s Eve, people spend the biggest. Baskets are $66 on average, a supposed to $55 for the rest of the year. After the Holidays, as in any retail or service sector, there’s a pretty pronounced decline in sales for January and February. The dual holiday sales increases are driven by commensurate increases in both price and volume. Average Item Price (AIP) is higher overall during the holiday weeks. So is Average Items Per Basket (AIB), which means that consumers are likely purchasing premium quality items. This would fit well with the idea that many of these purchases are for gifts or celebration The rise in AIPis even for both holidays, but AIB actually rises more sharply for Thanksgiving. However, Christmas sustains an increase in AIB for several weeks before the actual holiday. AIB goes from a little under 1.9 up to 2.1 for the big feast, but barely drops afterwards, and goes right backup to that level for two full weeks before Christmas. This is very clearly driven by gift-giving.

The industry is not oblivious to the Holiday sales bump, of course, and has rolled out quite a few seasonally appropriate products. During the holiday season, “winter warmer” products like Hot Cocoa, Coffee, and Tea see explosive growth with a compound weekly growth rate from the beginning of October through the New Year of over 11%. And Holiday Packaged products like Mr. Moxey’s Holiday Peppermints20-Pack (100mg) or Christmas Cookies Pre-Rolls also see high growth, with sales growing by 5.5% each week through the Holiday season. This category also includes things like holiday gift packs and more esoteric items, like cannabis Advent calendars. Retailers would be wise to team up with their suppliers to capitalize on the time-specific interest in these items.

To further confirm that cannabis is now a popular holiday gift, the categories that see the biggest sales increases for Christmas are ideal for wrapping up and relinquishing. Categories like Edibles and Topicals see the biggest increases in the week before the big day, while Flower sales actually drop off. Edibles go from 7.5% to 10% of overall sales, while Topicals go from 10% to 12%. Those gains are pretty much directly off set by a 5% decrease in Flower sales, and there is also a 1% bump for Beverages that matches with a similar decrease in Concentrates.

Flower and Concentrates are typically more popular with regular consumers, so this makes sense. And for those who want to give their auntan exceptionally special gift, a 1:1 THC:CBD brownie is a much safer place to start than inhaled cannabis. The segments with the Topicals category that grow the most also speak volumes about consumer motivation. The greatest gains are in Bath Salts, Soaks and Scrubs; LipBalm; Lotion and Salve; and Massage Oil / Lube. All very giftable items. Lip Balm, a very easy impulse buy, must be showing up in a lot of stockings, as it sees a 175% increase in sales for the week before Christmas.

In 2017, sales were up over 30% across the board on New Year’s Eve, as compared to a typical Sunday. While the fact that it fell on atypically slow sales day might explain the massive increase over your typical, dreary December Sunday, that’s still not a number to ignore. It’s also not a huge surprise. Any substance that can induce euphoria is going to be a hot seller on the most euphoric day of the year. And some CBD gummies could certainly come in handy for the hangover that follows.

Also unsurprising is the fact that the category with the biggest increases on New Year’s Eve is Beverages. The regular Beverages segment and the Carbonated beverages segment see a 79% and 75% sales increase, respectively, but the Mocktails segment—all the infused faux booze available—sees a 700% increase. Seattle cannabis processor Tarukino recently came out with “Vertus,” a non-alcoholic cannabis infused champagne, and it’s easy to see how that fits into the New Year’s Eve festivities. Cannabis is already popular among people who choose not to drink, but faux-booze canna beverages are an especially potent draw, as the social pressure to drink during the holidays is strong. Clearly, there are a lot of people out there who aren’t into ethanol, but still want to do the traditional champagne toast.

As the cannabis industry develops, its trends begin to take clearer shape. The explosion of new and different cannabis products helps, as shoppers adapt to what’s out there. Certainly, people have been buying more pot around the holidays since it became legal, but we’re beginning to see meaningful differences in what kind of pot they’re buying. In 2015, the Topicals category definitely existed, but it was such a novelty that it barely made a blip in the sales breakdown. And campaigns like Green Wednesday were definitely not a thing yet.

The nuance that now exists in cannabis purchasing patterns is great for retailers who are ready to capitalize on it. The holidays present a unique opportunity to get regular customers to branch out as they shop for gifts, and possibly even to discover something new for themselves. While Flower remains the dominant category in cannabis year round, it’s market share has been slowly waning. This is even more pronounced during the holidays.

We predict the increase in specialty sales during the holidays will continue as a trend, and in fact become more pronounced. With each new product like Vertus, an entirely new angle of attack is opened up for sales. People interested in a little bit of New Year’s Eve excess used to be limited to the Leira Cannagar, but the introduction of an infused mock-champagne opens the door to an entire set of consumers who don’t smoke. Given the numbers on actual cigarette smoking versus vaping, that demographic definitely isn’t going anywhere.

Overall, a picture of cannabis consumer behavior around the holidays is beginning to emerge. And while holiday purchasing habits are probably one of the most studied subjects in traditional retail, not all of the same rules apply. Cannabis is giftable in ways that other in toxic ting products aren’t—you don’t give your grandma Woodford Reserve to rub on her ankles—but it’s also something that is used to enhance the holiday experience. That dual status as a wellness product and a recreational substance means that there’s a pretty wide audience for holiday promotions, and we suspect that it’s only going to get wider as the industry gets bigger. 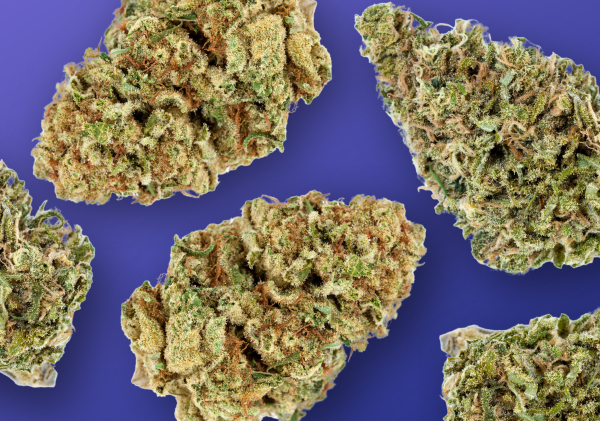 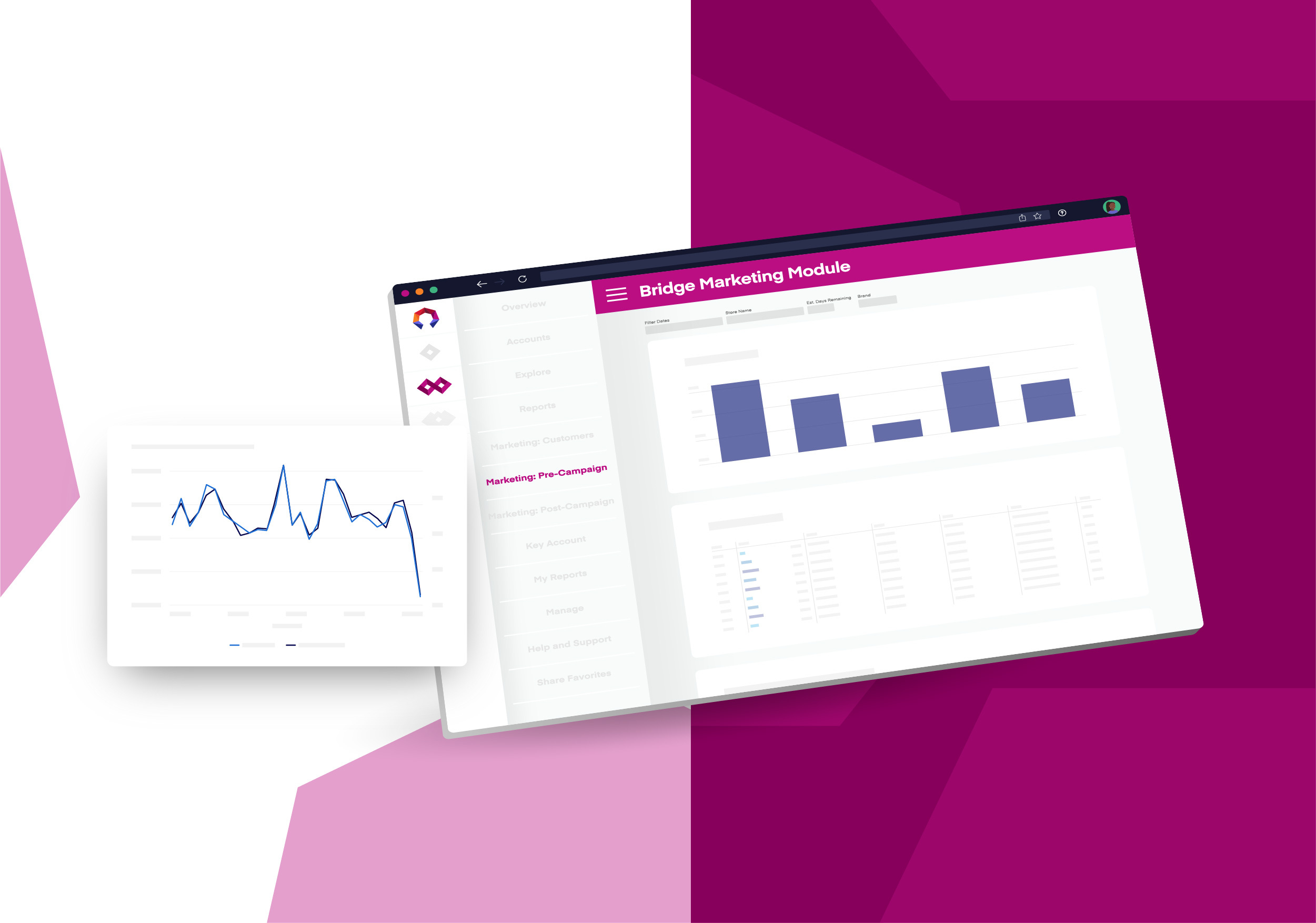 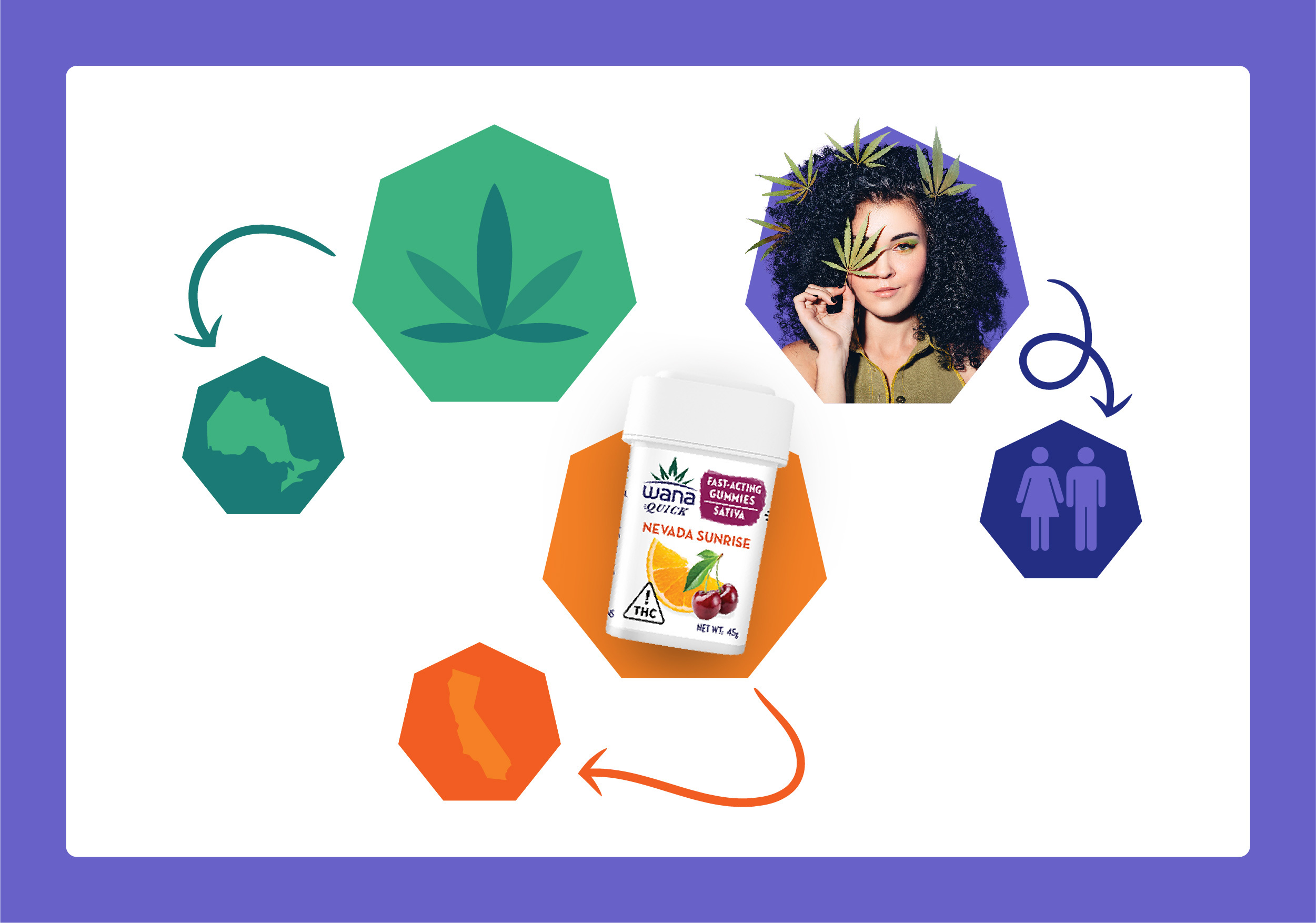